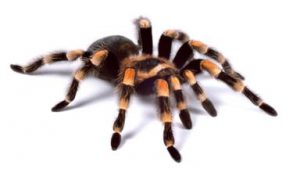 Our head of compliance, Leslie Jones, has recently suffered an injury at the hands of his 14 year old daughter Kimberley, and all in the cause of offering her a much-wanted pet!

She hadn’t specified what type of pet so, when she screamed having noticed a spider in the house her father, our head of compliance, told her that it could be her new pet. She screamed and ran away, followed by her father with hands clenched.

Kimberley felt she had a good escape route planned and ran through an open door, slamming it behind her in the process. Sadly, by this time, our head of compliance’s foot was part way through the door so that his big toe nail ended in an upright position, disconnected from his big toe.

Now, weeks later, minus ‘he feels’ half a litre of blood and after several trips to his local medical centre, he is finally on the mend, still minus a big toe nail however, and still making the most of every bit of sympathy he can get. He is, of course, still accepting apologies from his daughter!

The nurses at the local medical centre have done a great job ensuring the rest of the toe stays put, although they have had great difficulty hiding their laughter while treating the toe!

We would like to point out that no spiders or other creatures were injured during this tragedy other than the pride and appearance of our head of compliance, who is still walking around in open toed sandals and a large bandage on his big toe!

We, as a company, are issuing the St. Albans Medical Centre an award for their care and attention, and for not laughing too much!

We would like to thank them all for their professional and caring treatment.

Lesson for the week – Spiders do not make good pets!

A Competitive Edge with ISO Certification

Have a question about ISO Certification?

Your choices will be saved as a non-identifying cookie. This means that each time you load a webpage from this website, your chosen accessibility options will be applied. These cookies will last for 28 days before resetting.

Use these icons to increase, decrease or reset the size of the text throughout the site.

When text to speech is active, you can click the play button to hear the whole sites content read aloud. You can also highlight a section of text and press play, to hear only the highlighted text.

A screen mask is a reading tool which follows your cursor. It allows you to remove distractions from around the page and gives a clear area of focus.